Once, I was with someone. Once, I was in love. Once, I was happy. There is a striking feature of this film that resonates with anyone who has had and lost. I am not necessarily talking about love, but that would be the most obvious. The point is the past holds importance to all of us. It’s funny how painful memories are much easier to dwell on than those we would like to remember. But that is the truth and that is what this film gives to us. Some heartache, but mostly honesty. 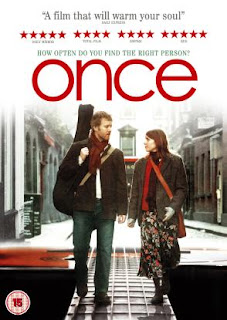 Once follows the relationship of Guy (Glen Hansard) and Girl (Marketa Irglova) as it blossoms through familiar love over the course of one week in Dublin. This film is as artistically beautiful as it is emotionally. From title to credits, your only thought is wishing success upon these two characters. They both contain pronounced musical talent while holding on to their humble character. However, sometimes we get confused on what success is for these two characters. Is it a record deal for Guy? A better life for Girl? Is it simply to find love or is it to find the right love? In a Hollywood sense, the viewer might be disappointed by the end result of the film. I would recommend looking at it from a different angle.

Friendship seems to always be a side plot in today’s films. Everyone wants to see love blossom from nothing in a film. Or at the least, friendship blossom into love. This film definitely teases us with that idea. I’m sure John Carney had this intention as he directed Once. We want the characters to forget about their past and focus on what they have in front of them. But what we must understand is that both character’s pasts have everything to do with what is in front of them now. Guy has his past love in London and Girl has her husband back home. Honesty keeps this film in check. And I am not one of those people who thinks honesty means misery, although I can see the simple appeal. The two leads go off in different directions, but stay connected. Through a piano. Through a song.

We look ahead to the end game and forget what got us there. The people around us who actually care. Friends, family, acquaintances even. This film reminded me about the people along the way. That one person who carried your life for a few years, months, one week. Once hits close to home in the best way possible.

Hansard’s voice will numb you and Irglova’s innocence will fill your heart. In my classes, my teachers always strive to keep us honest. They tell us to write with honesty. Tricks will get us nowhere. Be true and your audience will follow. They never really defined “honesty,” but just simply used the term. It is films like Once that show me what honesty means as a writer and what to look for in a film as a viewer.