The Perks of Being a Wallflower Lessons of Darkness

Most people don’t think “big market” when they hear the words Japanese realist melo-drama. Actually, nobody I’ve talked to has much to say about the topic. Honestly, it depends solely on your taste in film. If you’re a realist junkie who wants to get their hands on anything realism, then this film is for you. If you like to let your emotions roam free, then this film is for you. Coming of age, for you. There are many reasons to experience this film. Of course some are more upbeat than others. Here are some of the reasons I recommend Nobody Knows. 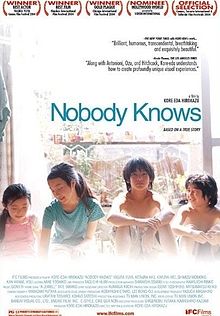 I understand how this film would go unnoticed by the majority of people. The only reason I found this film was because of a paper I had to write for one of my classes. But surprises have been found in worse places. Hirokazu Koreeda’s Nobody Knows tells the story of Akira and his three siblings. The four of them move to a new apartment with their mother, but only Akira is allowed to go outside. The other three are kept in the apartment hidden from all those living in the vastness, simply known as society. Without giving too much away, this film traces the struggle of these four kids to live on their own. However, it is also important to understand that the significance of this film does not solely lie in its plot. Rather, the meaning comes from a boy. Maturation is an idea explored by countless greats and it will continue to be written about time and time again. Koreeda identifies with the struggle of maturing. Pain and sacrifice are beyond relevant throughout this film. How we choose to accommodate the harsh realities of our lives is the question. Akira’s journey takes him and forces him into becoming the man of the house. The one and only provider. Fortunately, his path makes him deserving of the title. Unfortunately, he had to go down the path.

One virtue that should be taken into account while watching this film is patience. This film can run slowly at times. With a running time of roughly 140 minutes, it may seem unbearable at certain points. Just know the film was made this way on purpose. It is meant to feel drawn out and sluggish in certain scenes, as we are meant to follow in the footsteps of Akira. His feelings are transferred among the audience. Whatever emotions he may unearth become ours to find as well. This film is not a joyride. However, it is an emotional surge that should spark our interest. Challenges are thrown in front of us on a daily basis. I dare you to pick one up in the confines of your own home, sitting on your own couch, lying in your own bed.

Nobody Knows (2004) directed by Hirokazu Koreeda