A love story is always able to take on a life of its own. However, we as the audience do not see it that way. We grow tired from going to the movies, spending what left we have from our paychecks, and seeing the same old story of a guy and a girl who fall in love. Whether these stories are the same or not is none of my concern. Although I would have to disagree with the majority. But as the viewer you want to see something different, something special. Moonrise Kingdom delivers something special. It shows us a different type of love. A reason behind life. Wes Anderson was able to create a fresh premise that cured our nostalgia for Rushmore. 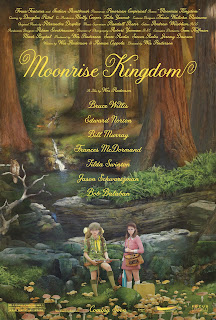 Moonrise Kingdom follows two young lovers, Sam (Jared Gilman) and Suzy (Kara Hayward), as they flee their constricted lives and go on the lam together. While on their journey, it seems over half the island is hot on their trail trying to bring them home. But what is the draw of this film? Confusion is one word that comes to mind. Mainly because at times I am not quite sure what to think of what I am watching. Wes Anderson puts a lot of faith in these two young actors, who have never acted in any other film, to convey so many different themes of life in such a realistic and honest way. Even now I am not sure whether I completely believe everything they had to offer, but in doing so I feel like an old man shaking my head at the ideas of the younger generation. Just because I haven’t found love or traveled all around the world. Found success or lived for something more than myself. This does not necessarily mean that these two twelve-year-old kids living in the 60’s haven’t. As striking as it is to say, these children showed more chemistry to me than some Oscar and Emmy award winners have in the past. Anderson critiques the very notion of age and wisdom. We root for this budding love story, because everywhere else we look we see depression and failure. This is the other half of the film that truly makes it something to watch.

Bruce Willis, Edward Norton, Frances McDormand, Jason Schwartzman, Harvey Keitel, Tilda Swinton, and of course Bill Murray. How could this film go wrong? Frankly, it can’t. Each character contributed while making sure not to overstep the last. Normally, you think Bruce Willis and you think that’s the movie. Normally, you would be right, but not here. Willis’s character is unlike most of his others. He lacks confidence and conviction. Really his character creates space rather than take it away. Actually, it is Willis, McDormand, and Murray’s characters who show how dysfunctional love can be. They contradict the story of the young lovers in an obvious way. Norton plays the innocent scout master, but at the same time very ignorant of the situations around him. Finally, Schwartzman plays my absolute favorite role of the film. You need to watch the film to see it for yourself.

There is a lot going on in this film, but Wes Anderson does what he does best; creates a great story. Like always, great characters as well. Just another film Anderson can feel proud of to put down on his resume. I feel like I’ve written too much already so I’ll leave you with this. There are thousands of love stories out there, watching one more won’t hurt you.