Twenty-four years ago The Hunt for Red October made its release, with the hopes of creating an established franchise, while boosting Alec Baldwin’s career that much further. Then came Harrison Ford with his gruff manliness, completing not one but two films within the Jack Ryan series (Ford’s career had already been boosted as far as it could go by this point). Ben Affleck took his turn next, bringing a reboot with him, though people weren’t too fond of that one meaning a sequel just wasn’t in the cards.

So, what does it take to make a studio reboot a franchise twice? Apparently Chris Pine and twelve years. And it makes sense, Pine has been on the upswing these past couple years, which means he currently leads the Star Trek franchise. Plus we all know in today’s world it’s not enough having only one franchise, that would be ridiculous. Whether or not his second franchise will last is the question.

Sir Kenneth Branagh’s director choices have branched out over the past couple years – apparently stealing that habit from Ang Lee. Branagh has had a little practice in the blockbuster action genre with Thor, so finding out he was helming Shadow Recruit was not too much of a surprise. Also because of his work from ’89-’96 I give him a pass on everything.

I am not going to lie to you, the film has some problems. Okay the first act, a lot of setup. A lot, a lot. Too much if I’m entirely honest. The opening sequence shows Jack Ryan’s (Chris Pine) motivation for joining the Marines through his viewing of the 9/11 attacks on the news. Eighteen months later Ryan is a Second Lieutenant serving in Afghanistan. While on a mission his helicopter gets shot down, critically wounding him and leaving his hopes of returning to the military all but hopeless. Then we see him in rehab, barely able to walk and lacking will. 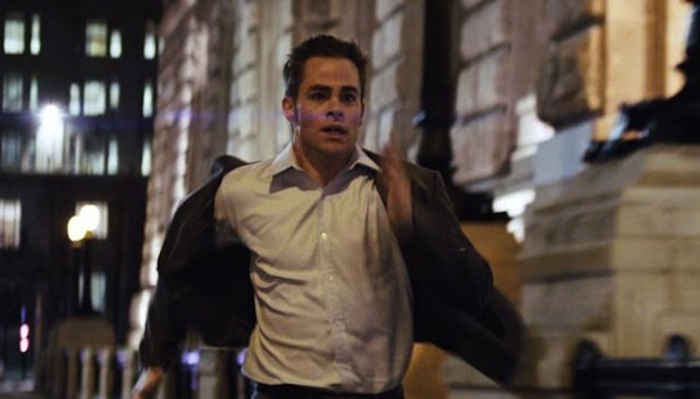 Part two. While at rehab he meets Cathy Muller (Keira Knightley) for the first time and is curiously eyed by Thomas Harper (Kevin Costner) of the CIA. Basically Harper offers him an analyst job at the CIA and Ryan gets better. Okay, ten years later we finally get to the driving point of the story. Ryan is working on Wall Street and spots financial transactions that stipulate terrorist activity. Aaaaand cue the second act.

All this setup tells us two things. One, Shadow Recruit is much more slow paced than your typical Hollywood action film. The second shows that all those involved on the creative end emphatically wants their audience to know and care for Jack Ryan. In essence, setting up the franchise, which if it works is a good move for making money.

Let’s get into characters shall we. Chris Pine actually surprised me with his performance convincingly portraying the transformation from a desk job to full-blown field agent. However, the learning curve doesn’t lost long as Jack Ryan becomes really good at kicking ass very quick. Keira Knightley was good as always, but it was weird hearing her American accent. Her character was either poorly written or the most understanding woman I’ve ever met. CIA doesn’t faze her, stone cold killer doesn’t faze her, large terrorist attack, nothing. Well actually, the thought of Ryan cheating got her worked up a bit.

I understand the appeal of “the cool guy.” The one’s that mysterious, don’t know his past, breaks all the rules. It’s pretty much a cliche at this point. That being said, I would be 100% shocked if there is an CIA agent out there like Thomas Harper. His character is really as unbelievable as it gets. Seriously, write a mentor I could possibly think has a chance of existing. Although… Kevin Costner as a CIA agent, kind of cool.

Every spy film needs a good villain, that’s just science. Kenneth Branagh casting himself as the main Russian baddie, Viktor Cheverin, was a fantastic choice. I’m so used to seeing him as the main focus or at least on the good team that predicting his effectiveness was tricky. Then again I should never question Branagh’s talent, in fact he should stay Russian at all times. Now, all that was so I can say Branagh wasn’t the problem. My problem once again is with the writing.

At no point throughout the film did I once think the bad guys might win. Cheverin lacked competence and that small hint of crazy the greatest villains usually possess. Shadow Recruit was consistently one-sided. Jack Ryan and his team cleaned house, and in a relatively easy manner as well. No sacrifice was needed to complete the mission, everyone got out with mere scrapes and bruises.

Now time for a positive. I would like to revisit the pace of this film. Once out of the first act things go smoothly, hinging on the slower side. It was refreshing, the film was able to grow by being pushed away from “over the top” action. Only one thing blew up – and it wasn’t that spectacular – less than ten people died, and the story’s problem made at least some sense.

Wait for this one to come out on Redbox, Netflix, or however you watch your films outside of the theaters. Shadow Recruit was entertaining, but nothing stood out as amazing. Though I think the sequel has a chance of being much stronger and bring a far superior story to the screen, box office numbers might nip that dream in the bud. Only time will tell, and Mr. Pine needs his second franchise.