A Batch of Reviews #1

I really held no interest for this film during its promotional stage. I haven’t read the book and it looked like Hollywood was just trying to cash in again. Then it came out and murmurs started spreading. My friends actually enjoyed it, and even crazier, the ones that read the book loved it. Still, the price of admission seemed too high. So began the waiting game. Months later, Ender’s Game found its way to my computer screen.

Got to say, it gave me more than expected. From concept to acting, the film scored a wealthy entertainment value. Watching the film you come to realize the risk taken by these producers birthing a blockbuster banking on the performances of child actors. Unfortunately, box office numbers showed their risk was unwarranted, yet I would disagree. Sure there was a certain amount of cheese that stems from the territory, but in the scope of things these actors kept me in the moment.

Ender’s Game wasn’t fantastic or revolutionary by any means. However, you put this film up against the crap that came out last summer and you have yourself a pretty solid film. The cast list remains impressive and the runtime is reasonably merciful. Director Gavin Hood hasn’t put out the most critically acclaimed films throughout his career, but delivers a solid effort nonetheless. If boredom ever strikes you or the need for something in the background arises, might I recommend Ender’s Game as a solid distraction to pass the time. Apparently with old age comes camaraderie, because it seems like Stallone and Schwarzenegger are in every movie together nowadays. This isn’t a complaint by the way, it’s more of a hearty exclamation. Both these men have been busy over the past couple years, outputting action films left and right. The resurgence began a few years ago with The Expendables and has ceased to hasten since. Needless to say my life has been filled with cheesy one liners and steroid-fueled deaths.

Escape Plan romanticizes the idea of prison a bit, creatively showing the prison system as lacking and wavering. Stallone’s character makes a living from breaking out of prisons – apparently that’s a job – but then comes the twist, a prison impossible to break out of. Didn’t see that one coming. Anyways Stallone meets up with Schwarzenegger thus forming a partnership to escape. Do they escape? Obviously.

Like said before, I thoroughly enjoy the recent partnerships of Sly and Arnie, but there was something seriously off with Escape Plan. There is an expectation of sorts when these two collaborate that just wasn’t met here. I was actually impressed at moments of Schwarzenegger’s acting and the concept was certainly there. It just failed to fit together. You could probably blame the script, direction, or egos of the talent, but none of that is stopping me from crossing my fingers for more brilliant future endeavors from two of the preeminent action icons of all time.

Wow, umm, well this was different. Filth is creatively terrifying in its own right, bringing every depraved act imaginable to the screen. The trailer definitely set the tone activity wise, but the film’s plot remained somewhat of a mystery. Turns out the plot has very little to do with this character story. There are a few connecting threads here and there, but for the most part we see McAvoy’s character just go.

James McAvoy is quickly becoming one of my favorite names in the biz with his ranged filmography and Scottish charm. Here he pulls absolutely zero punches, a performance maybe only rivaled by his character in Trance. Oddly enough among all the drugs, sex, prostitution, lying, framing, rampant alcoholism, and murder, McAvoy’s character is a Scottish detective who will stop at nothing for a promotion. When I say this film is out there, I mean it, but underneath the theatrical facade lies something important, something sad and meaningful.

Jon S. Baird’s directional skills were universally unknown before this film. It’s an interesting way to get your name out there. With a film like Filth it will be near impossible to go unnoticed, but making his way into the American market might take some time, especially if he wants to branch out of the indie genre pool. Bottom line, I liked it. It’s not perfect, well… it’s not really even near perfect, but plot holes and character issues aside, I can safely say it will be hard to forget a film like Filth. 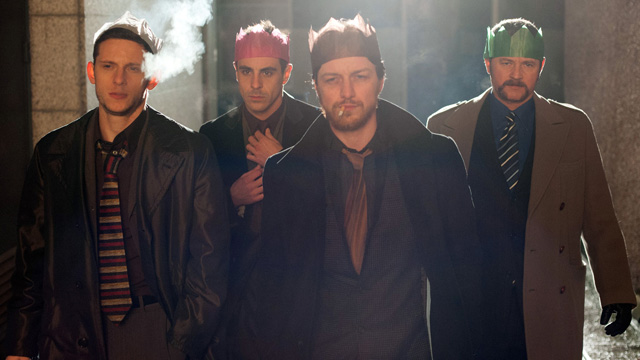 Does it say something about my taste in film that I was actually looking forward to Red 2‘s release? Probably, but I’ll say this much, I wasn’t going to get caught buying a ticket. The first Red was a guilty pleasure of mine, how could it not? Bruce Willis and John Malkovich in the same movie? That’s gold under every circumstance. The names they get for these films are outrageous. On top of Willis and Malkovich are Freeman, Mirren, Hopkins, Cox, Zeta-Jones, Borgnine, Dreyfuss, Thewlis, and of course Parker.

This franchise is apparently following in the footsteps of The Hangover series by basically making the same film over again. Sure, different characters and different locations, but I couldn’t honestly explain everything that happens. I watched this movie a day or two ago and am already having trouble deciphering Red from Red 2. Basically Willis, Malkovich, and Parker have to track down a nuclear weapon lost over the years in Russia, while being hunted themselves. That gritty one sentence synopsis should suffice.

I can’t really remember watching a film with John Malkovich in it and disliking his performance. Con Air is a pretty standard choice, Rounders might be my other. What I’m trying to say is throughout Red 2, it is a joy when he’s in the scene and a bummer when he’s not. His character is suited perfectly for his personality as he constantly brings laughs that might be lacking otherwise. This film is far from great, but does hold a necessary amount of entertainment value to make it a worthwhile venture. Buying it might not be your best choice, but ben on the look out for that cheap rental. 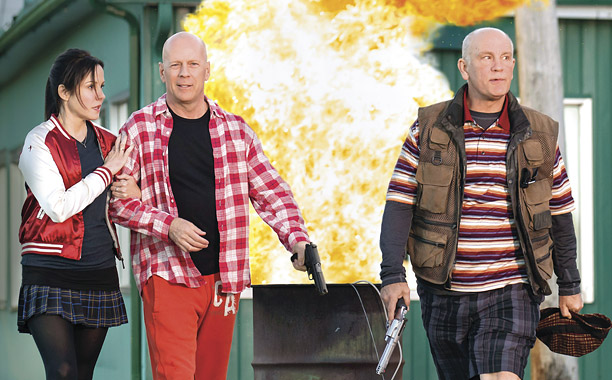 So classic. I still remember going to see this in theaters with my dad. That was ten years ago, but I think it will always be a strong memory of my childhood. With the Olympics commencing in the background it felt more than appropriate to revisit this historical representation. Although the USA v. Russia mentality isn’t what it used to be, there is a sort of remembrance that sparks a little tension. Plus Kurt Russell is always a joy to watch.

The 1980 U.S. Hockey Team is now a thing of legend. Miracle spotlights the coach of that team and the determination of its special individuals. Saying this is a Disney film is not simply a characterization, but rather an actuality. Considering the circumstance there is a side of grit to this film I find favorable. Coach Herb Brooks needs to build a winning team. Of course he will stop at nothing, but the importance lies in molding his players to do the same.

If you know your history then you know the film’s outcome, also I don’t think Disney would make a film where the Russians come out victorious. Spoiler or not, Miracle keeps you focused for the climax. It feels good to root for your nation, this group makes it that much easier. An underdog mentality is often the most effective tool for audience captivation, and sure some stories write themselves. But there is a certain “umph” a writer can bring to the table, well a good one. I’d say a fun one to watch with the family, but I had a nice time watching it on my own.